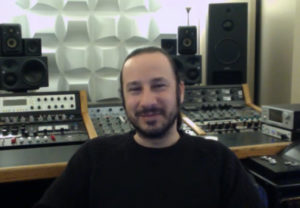 After splitting this episode in halves which resulted in 2 VERY large video files, here is the audio of my full unedited conversation with Maor.

Moving to America from Israel and initially working with Sylvia Massey, he is now the owner and operator of Maor Appelbaum mastering in L.A.
His credits include Faith No More, Sepultura, Yngwie Malmsteen, Meatloaf, Mayhem, Angra, William Shatner, Therion, Dokken, Armoured Saint and many more.

– Greetings
– Maor’s history
– Working with Sylvia Massey
– Conventional audio training
– Why did Maor choose mastering?
– Developing mastering skills
– When a client’s vision works against the music.
– When a lot of the time there IS a budget.
– Was there a project(s) which really opened Maor’s career?
– Mastering Sol Invictus and re-mastering We care a lot FNM
– Using the flaws in a recording to create character
– Processing which mixers do which works against the music
– Taking a musical, non-forensic approach to mastering
– Having a go-to chain vs doing what’s required for the music
– Do you have a working relationship with bands where they send you mixes and you give feedback?
– Do you sometimes not even hit analogue? Ie do a 100% digital master?
– Using old DAW’s and plugins.
– Running signal through gear for colour.
– Auditioning different sets of converters and clocks.
– Do you ever get colour from using plugins?
– Do you ever throw up a reference master/mix when finishing a master?
– Has loudness normalisation changed where your masters are arriving at in terms of overall level?
– Do you make different masters for vinyl, CD and streaming?
– What gives an album longevity and enjoyability in terms of production? (spoilers: not “loudness”)
– The amount of compression necessary for “that” sound is less than what people think it is?
– Maor’s room and monitoring (his room was done twice before he was happy with it).
– Main difference between the initial room acoustics and what it is now.
– Is your room super flat or does it have a curve that you like?

I hope you got a lot out of this one. I’ll catch you on the next round.